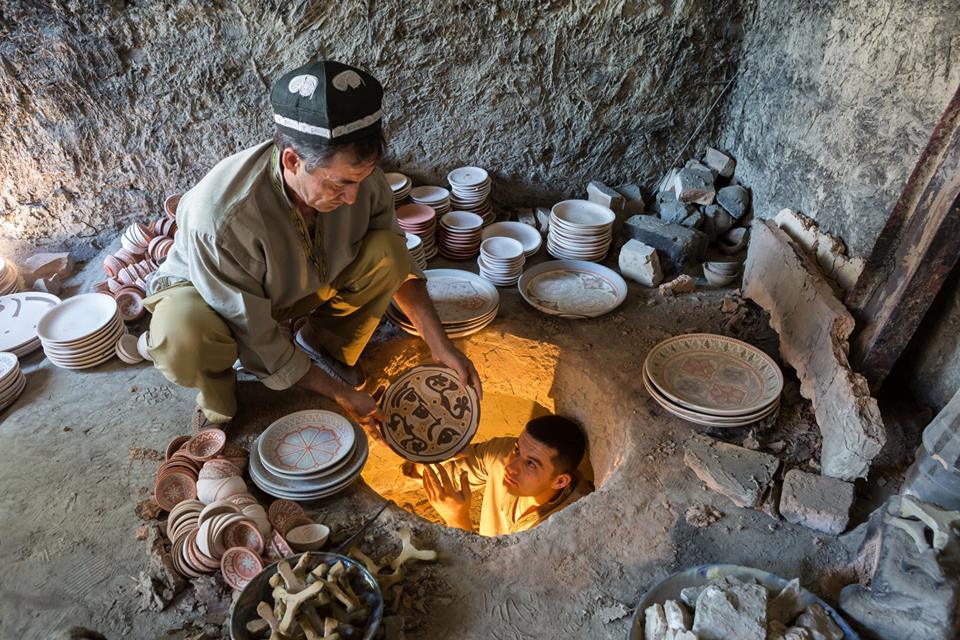 This exhibition features contemporary examples of work by master potters from some of the main pottery producing areas in Uzbekistan. It explores Uzbekistan’s rich heritage in ceramic production alongside Welsh folk pottery traditions, such as the Buckley and Ewenny Slipware held in Aberystwyth University’s Ceramic Collection.

From antiquity through to the Middle Ages, large cities in Uzbekistan arose along the Silk Road, the ancient major East-West trade route. Archaeological excavations have revealed that ceramic production was highly developed from as early as the 8th Century, when the first green-glazed ceramics were made. Between the 14th and 16th Centuries, ceramic production flourished and a wide range of ceramic wares were made for both domestic use and for international trade. Chinese porcelain, traded along the Silk Road, inspired the production of a delicate porcelain-type pottery using a sand-based, porous material known as ‘kashin’. The mineral cobalt was used to create blue decorative designs in imitation of Chinese ceramics.

In the 17th and 18th centuries, as ties between the pottery-producing areas weakened, many regions developed individual styles. Master potters became specialised and secrets of the trade were passed down through successive generations of the family. Boys were taught the full production process while girls were confined to ‘secondary’ roles such as applying ornamentation. By the 19th century, ornamentation on ceramics from Uzbekistan featured a wide range of designs, often borrowing complex patterns and motifs from other applied arts such as wood carving and embroidery.

Pottery production in Uzbekistan declined in the early 20th Century with the increasing importation of commercial goods from Russia. After the Russian Revolution there was a revival in the craft in the 1920s when artels (craft cooperatives) were formed and new systems for training apprentices were introduced. From 1960 the production of ceramics increased under the control of local Soviets, training centres were concentrated in areas such as Tashkent, Rishtan and Khiva. Masters were trained in new specialisms and teams of students were recruited. Uzbekistan gained independence from the former Soviet Union in 1991.

Ornamented ceramics continue to be part of Uzbekistan’s culture and play an important part in Uzbekistan daily life. They are used for decoration in architecture and for domestic use. There are customs associated with acquiring new pieces: tableware is offered as marriage gifts and the semi-governmental community groups known as ‘mahallas’ keep sets of tableware for collective use.

Traditional methods of ornamentation include carving, engraving, stamping and painting. Stamps are sometimes cut from reeds or wood and sometimes made from root vegetables or clay. Paints are made from minerals and are brushed onto ceramics that have been covered with a white slip. Ancient geometric plant motifs, laden with symbolic meaning, are used alongside naturalistic depictions of contemporary everyday items. These traditional designs are now considered an expression of national culture and identity.

This exhibition represents ceramics by masters from some of the most significant pottery-producing areas in Uzbekistan. It continues an artistic dialogue between Uzbekistan and Wales which arose from the ‘Arts for Sustainable Development’ programme run by the British Council in conjunction with Wales Arts International in 2017.

This exhibition is supported by Uzbekistan Airways, Uzbekistan Tourism Development Company, Uzbekistan Handicraft Association, The National Lottery, the Welsh Government and the Arts Council of Wales. 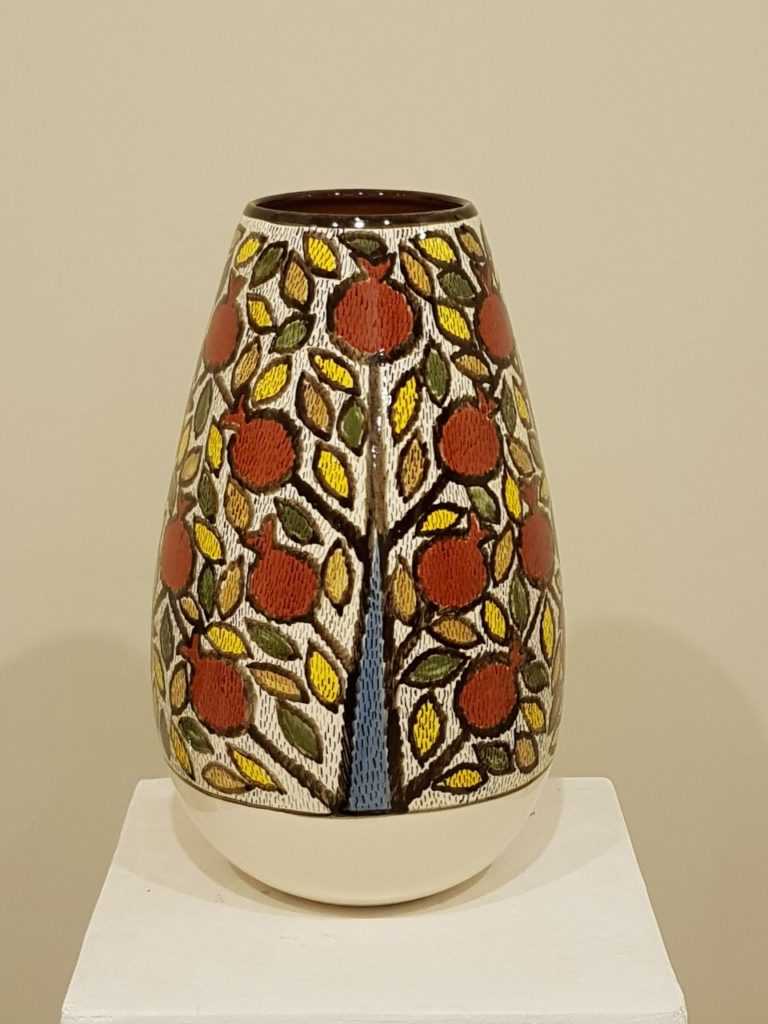 Master Ceramist Alisher Rakhimov was born into a family with a long lineage of ceramic masters in Tashkent, an ancient centre of ceramic production. He studied ceramics within the family tradition from an early age and then at the Republican Art College in Tashkent. He has exhibited in Japan, Germany, the USA and Israel and been part of various UNESCO projects to revive ceramic technologies of the past.

In 2004 he was the author of five documentary films for UNESCO entitled Ceramicists of Uzbekistan and in 2006 he edited the new English edition of the books by his father Mukhitdin Rakhimov (1903-1985) Artistic Ceramics of Uzbekistan and Architectural Ceramics of Uzbekistan. In 2012 he received the title of ‘Honoured Art Worker of Uzbekistan’. His studio in Tashkent has held several exhibitions including Traditions and New Approaches to Ceramic Tiles in 2014, Ceramics without borders in 2015 and Continuous Flight in 2016. His work is in the collection at the Museum of Applied Art in Tashkent. 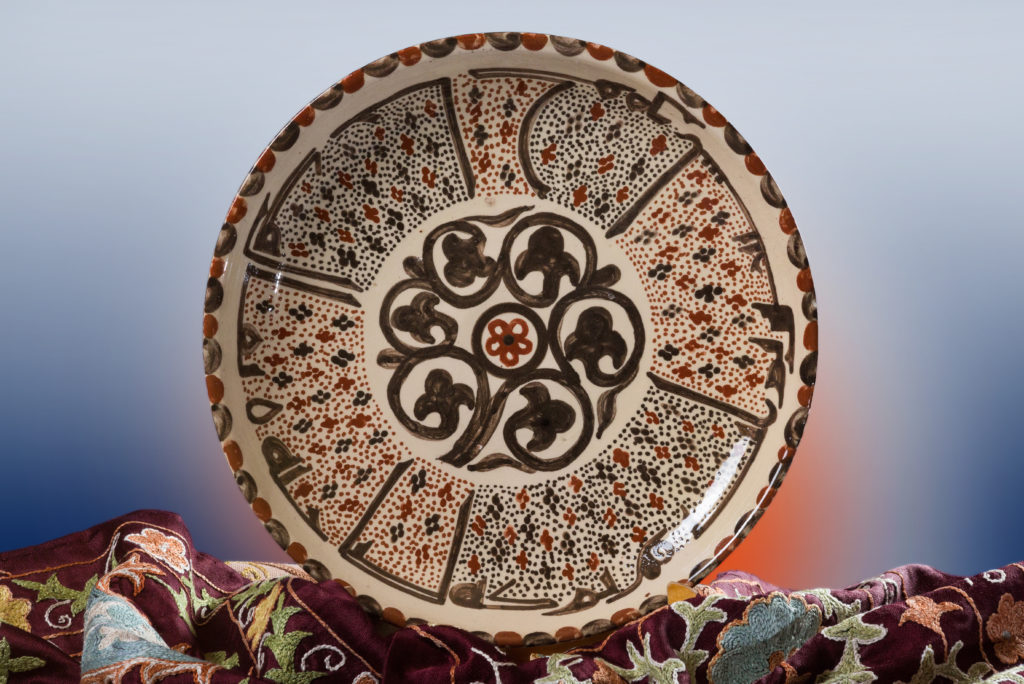 Abdulla Narzullaev is from Bukhara, a region renowned for its colourful glazed ceramics. He comes from a family of at least six generations of ceramics masters and embroiderers and began learning his craft from his father at the age of seven. The women of the family have revived the traditional embroidery styles of the region that are part of another great Uzbek tradition, that of the Suzani, a richly embroidered textile, in silk or cotton which formed part of the dowry of a bride.

Narzullaev has exhibited his work internationally in over a 100 exhibitions, including the USA, France, Germany, Japan, Pakistan and Kuwait. In 1992 he opened a museum of ceramics in Gijduvan, 45 kilometres from Bukhara, which also houses the workshop where he and his co-workers make traditional Gijduvan ceramics. Gijduvan decoration is confined to floral and geometric motifs in keeping with an Islamic tradition of not making images of living beings. 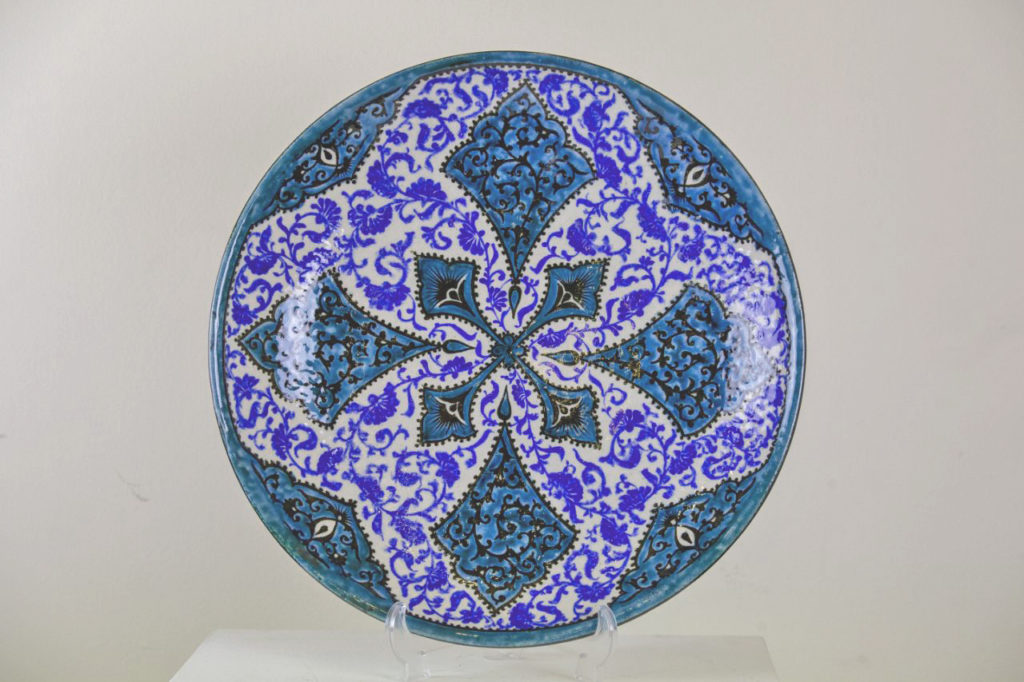 Alisher Nazirov, from Rishtan in the Fergana Valley, is one of Uzbekistan’s most famous ceramicists and teachers. From the age of 12 he studied with some of the Uzbek masters of ceramics and in Soviet times was the main artist at the Rishtan Art Ceramics Factory. After Uzbekistan declared independence from the Soviet Union in 1991, Nazirov was able to visit Japan where he did an internship with Isojichi Asakura, the famous pottery master of Kutani school in the mid-1990s.

From an early age he has had an interest in archaeology which led him to reproduce the ishkor glaze-a blue-green glaze derived from a desert plant. The glaze had been used in the area since the 10th century when it may have been invented in an attempt to copy the famous blue-and-white Chinese porcelain.

Nazirov’s contribution to maintaining the cultural heritage of Uzbekistan was to found the ‘Usto-Shogird’ [Master-Student] School. He has also been at the forefront of restoring the ancient traditional forms and designs of Rishtan ceramics earning him the title of ‘Keeper of the Traditions’ in 2016.

He has since exhibited in Moscow, Komatsu in Japan and in Hannover and Munich in Germany. His works are included in the collections of the State Art museum of Uzbekistan, the Academy of Arts of Uzbekistan, the State Museum of the Arts of the East in Moscow, the Ethnography Museum in St. Petersburg, and the Ceramics Museum Asakura-san in Komatsu. 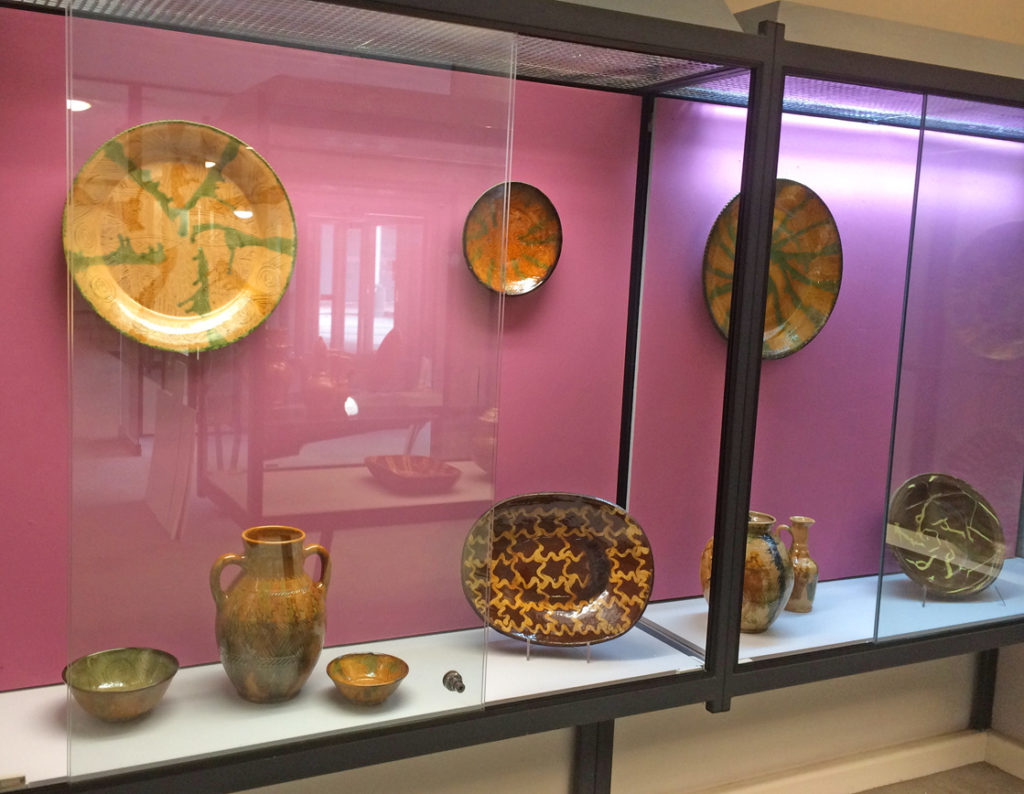 Today, traditions from this unique ceramic center are being continued by Numon Ablakulov and his son Inom Ablakulov. They are descendants of famous master Abdullo Ablakulo (1648-1735) who established the Urgut ceramic school in the 17th Century. Numon has a small museum at his house with a collection of works by his father and grandfather.

Odilbek Matchonov has been working using traditional methods for many years. He is the son of the famous master potter Raimberdi Matchonov whose works are in many museum collections worldwide. Odilbek contributed to the restoration of historical monuments Al- Khorazmi , Al-Beruni  (1999-2000), Bakhouddin Nakshbandi (2003), Sultan Vays ( 2004) and others. He produces a variety of traditional ceramic dish forms such as chanok bodiya [a small sized deep dish with vertical sides on a high support] as well as vases, cups and bowls.

The Khorezm ceramic school is one of the most well-known centres of ceramics in Uzbekistan and Central Asia. At the beginning of the 20th Century there were 15 ceramic workshops with over 80 masters working. Khorezm potters tend to favour deeper pots with thick borders rather than flat dishes. Khorezm ceramics are distinguished by strong coloured glazes, usually deep ultramarine and turquoise-green on a white background. There is a preference for traditional patterns and techniques in the decorative motifs. 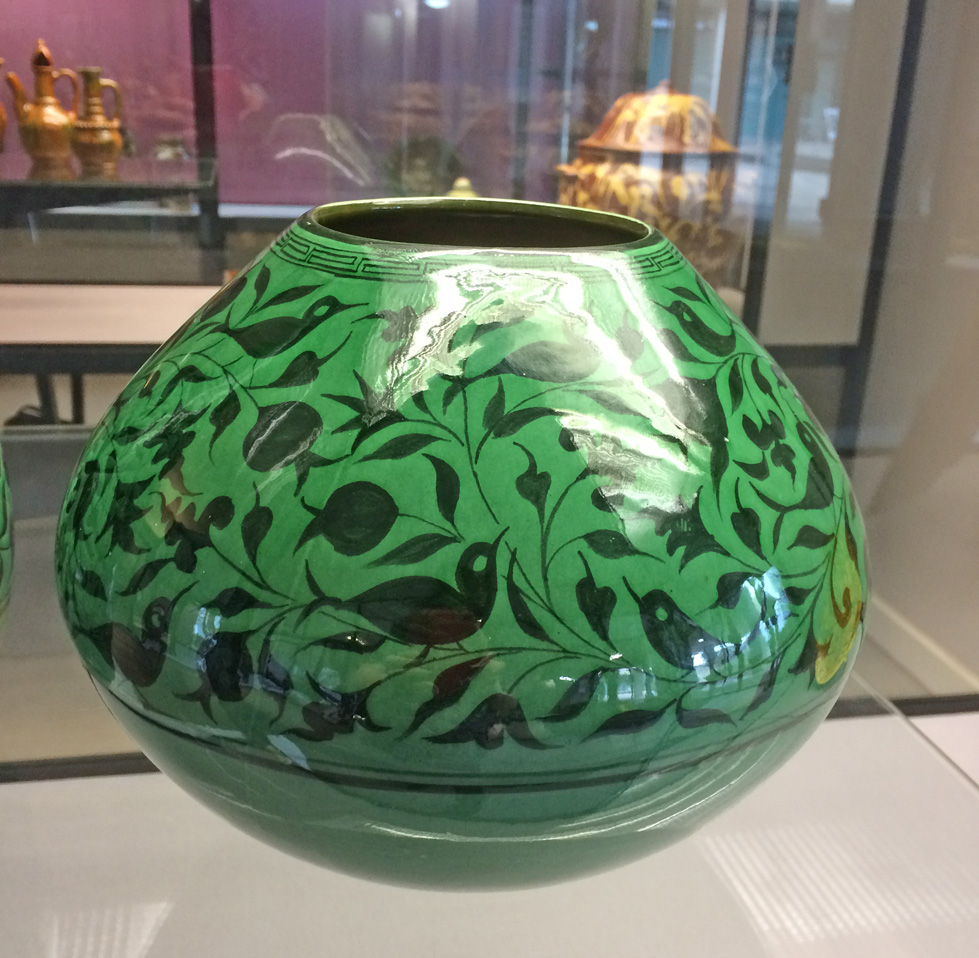 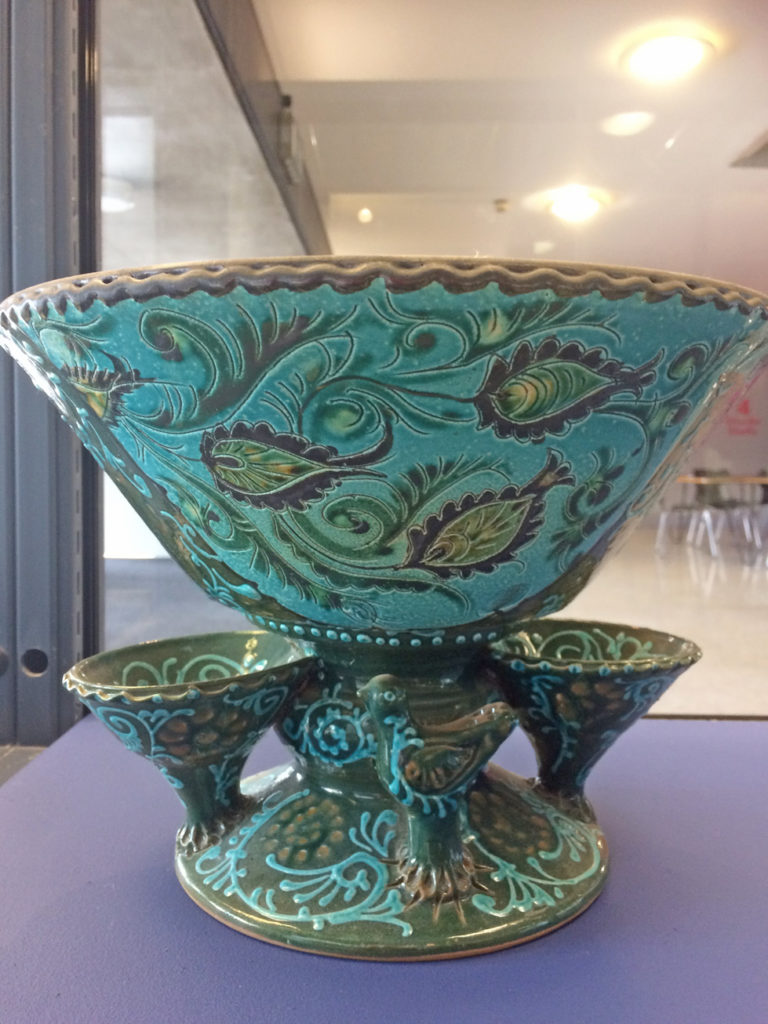 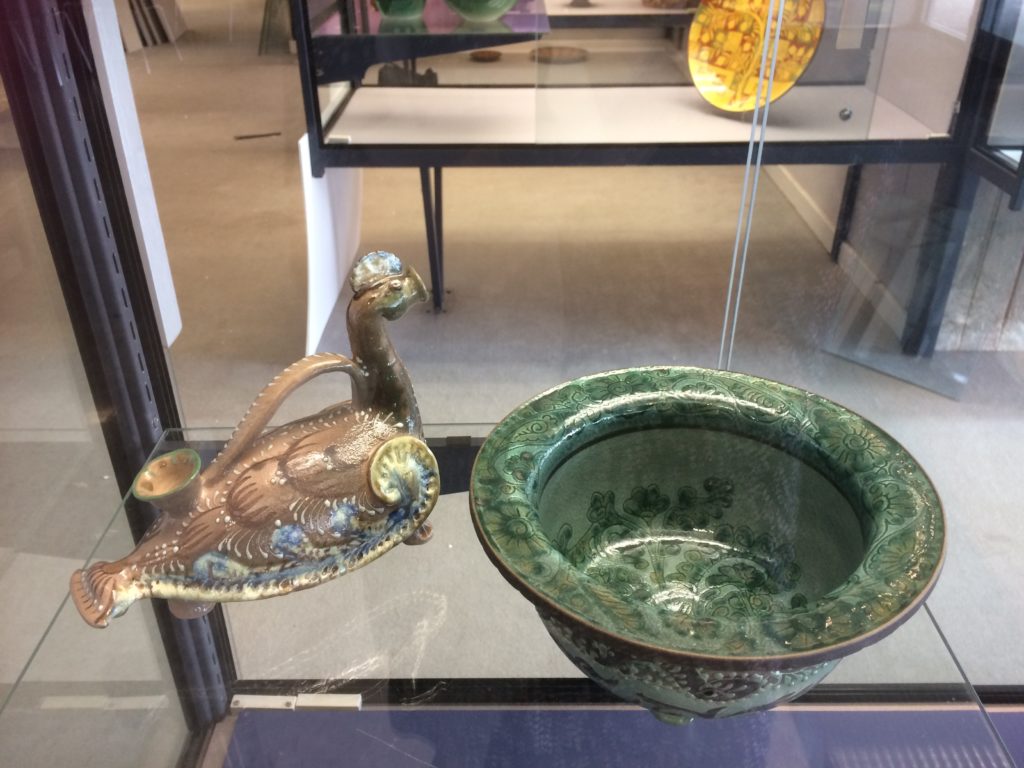