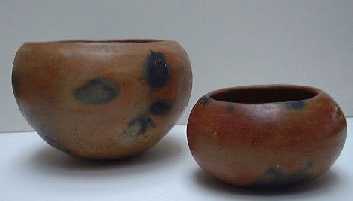 Marlene ‘Munchie’ Rhoden, who lives in Spanish Town, Jamaica, is the daughter of the well known potter Ma Lou who died in 1992. Munchie carries on making pots in the hand-built African tradition as taught by her mother. Ma Lou was taught by her mother and in this way the tradition which was learnt many generations ago in Africa has been handed down from mother to daughter. At one time pottery was in great demand for cooking and storing food but in these days it is necessary to find another market for the pots. Although Munchie continues to work in the traditional manner she has had to adapt to present day demands in changing the shape of some of her pots. The most popular pot, which was originally a rounded bottom cooking pot is now used more as an ornament, thus purchasers prefer a flat bottomed pot. Munchie describes her craft and talks eloquently about the problems of making a living from her it and her hopes that her only daughter will be able to continue the family tradition.