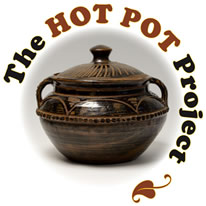 In January 2014 we accepted a major acquisition of 330 pieces of studio pottery to be known as the Ann Carr collection. is was donated to the University by Julian Carr in memory of his mother Ann Carr (1928-2013) who was a friend, neighbour and admirer of Michael Cardew. As part of his close circle in the Wenford Bridge area she was among the first to be there at kiln openings, even at times participating in kiln firings at the pottery. In turn, Cardew was a frequent supper guest at her beautiful modernist house, Fellover. It was built in 1960 as her home and for the private primary school which she ran for many years. The house was filled with the pots that she had collected and used with pleasure throughout her life. It even had a small pottery in the basement where Cardew and other Wenford potters came to teach the children. She shared with Cardew her interest in classical culture, was passionate about Greece and was fluent in modern Greek. Latterly she spent parts of the year at her small flat on the island of Naxos. It provided a haven at times in the 1970s when Michael Cardew was writing his autobiography.

This important collection is all associated with the Wenford Bridge Pottery established by Michael Cardew in 1939. However much of the work is produced by some of the significant potters who worked with him there. He was frequently in Africa in the 1960s and after 1970 was often away on tours of the US and Europe. As well as the work of Michael Cardew himself, other significant makers include –Gwyn Hanssen-Pigott, Svend Bayer, Ladi Kwali, Danlami Aliyu, Michael OBrien, Seth Cardew and Richard Batterham. With the help of a Federation of Museums and Art Galleries of Wales Grant, over the summer of 2014, the collection was catalogued and photographed by Robert Sanderson and Coll Minogue who brought their expertise on woodfiring, pottery and photography to the task. The whole collection is now on the Ceramic Collection website.!

In the autumn of 2014, we were successful with an Arts Council Wales grant which was the largest we have had. Some of this was to develop interdisciplinary project work around the Ann Carr collection working with school children, university students and also the general public. The Hot Pot Project was born – see more below.

The original collection was used in a student project on the Ceramics and Collection Management module working with the oral history recordings made by Dr. Tanya Harrod for her prizewinning biography of Cardew. She gave a public lectures in the Arts Centre cinema with on writing biography early in 2015. Author and potter Josie Walter also gave a lecture on cooking pots followed by a handling session where The People’s Collection of NLW made recordings of people talking in relation to the pots. 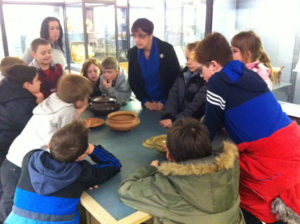 We ran a schools project with Llwyn yr Eos, Penparcau Aberystwyth between February and June with 10 weekly sessions. This was led by Oliver Morris and included two visits to the Arts Centre and one to Ceredigion Museum. Philip Eglin did a workshop with the children in the school and the tiles that they made on that occasion were part of the display in the Eglin exhibition. 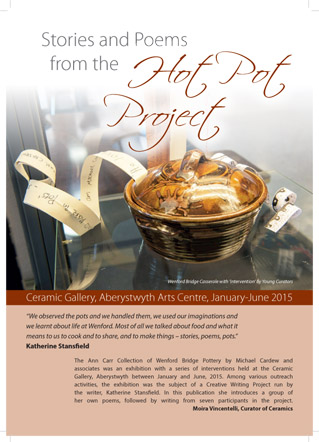 Stories and Poems from the Hot Pot Project

We also ran a very successful creative writing project in relation to the show. This was led by Katherine Stansfield and ran over 6 weeks. There were 4 sessions with a final public reading of examples of work by participants. We published Kath’s poems and one by each of the participants and distributed this at the ICF. Moira Vincentelli also made a video recording with Kath reading her poems.

We had a family workshop in relation to the show in January, February and March and some of the children’s pieces were put into the display, much to their delight! 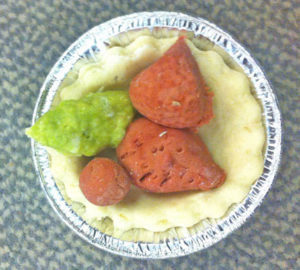 The first main intervention was the commissioning of crocheted fruit and vegetables by Laura Cameron (Caernarvon) which were made in relation to the food mentioned in so many of the oral history interviews.

The second intervention and project was led by Anna Evans and the Young Curators at Ceredigion Museum. They were meeting weekly from February but in the Easter holidays the group undertook a major intervention into the show using dried food stuffs, wires and images. Anna Evans also did a workshop with Penweddig School in March and their work was incorporated into the final intervention. Moira Vincentelli made a short video of this project with interviews of participants which was shown in the gallery during May and June 2015. 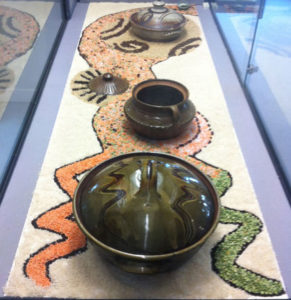 In June, Prof. Moira Vincentelli collaborated with Jenny Williamson (NLW) to participate in a conference for Conservators in Wales ‘Damage who Cares’. A number of the presentations related to ‘broken & mended pots’. We are planning a third version of the Ann Carr collection for Spring 2016 which will be based on this theme I gave a talk and my budget paid for Gas Kimishima’s talk on Japanese Kinsugi.

For a blog that gives an account of the Hot Pot Project see https://moirav.wordpress.com